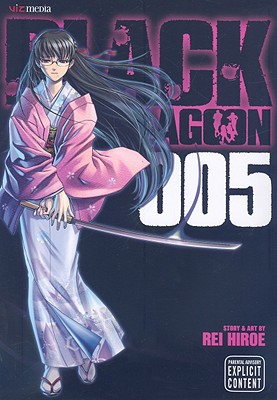 Lock n' load with the baddest soldiers of fortune ever to hit the high seas of Southeast Asia! Aboard their World War II era torpedo boat, the Black Lagoon, Dutch the Boss, Benny the Mechanic, Revy Two Hand, and Rock, the salaryman from Japan, deliver anything, anywhere. In the dangerous underworld of the Russian Mafia, Chinese Triads, Colombian drug cartels, crazed assassins, and ruthless mercenaries, it's hard to know who to trust. But if you've got a delivery to make, and you don't mind a little property damage along the way, you can count on the crew of the Black Lagoon!

Rock and Revy form an uneasy alliance with Ginji, the Washimine-gumi's top enforcer, to rescue Yukio from her kidnappers. Even if she can be freed, Rock finds Yukio's position as the new head of the Washimine-gumi hard to accept, especially when it calls his beliefs and loyalties into question. The conflict between Hotel Moscow and the Washimine spirals into greater violence, setting Rock and Revy on a collision course with Balalaika, and ultimately, a shocking climax that will change Rock forever.

Rei Hiroe debuted as a mangaka in 1993. Since then, he has been an active illustrator and dojinshi and has created many titles released through the dojin community. His most recent work, Black Lagoon, is a huge hit and is serialized in the monthly magazine Sunday GX. The Black Lagoon animated TV series has also reached blockbuster status.
Loading...
or support indie stores by buying on