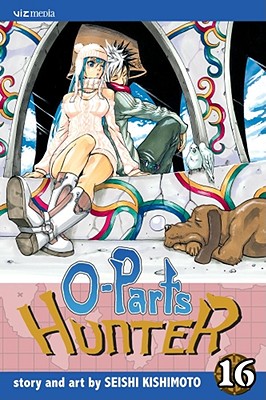 Ruby's dream: to become a famous treasure hunter. Jio's dream: to rule the world In a not too distant future, mankind battles over O-Parts, powerful relics from an ancient civilization. Jio is a young boy with a tragic past who only trusts one thing in the world: money. Little does he suspect that he is also a very powerful O-Parts Tactician (O.P.T.), and inside him sleeps a demon of incredible ferocity. With his partner, Ruby, Jio embarks on a dangerous quest to acquire as many O-Parts as he can. After destroying Miko's robot body, Jio reunites with Ruby. They join with Ball and their other friends to search for the headquarters of the Zenom Syndicate, which has been making progress in capturing the Demons of the Reverse Kabbalah. However, little do they realize how all-consuming their search will become.