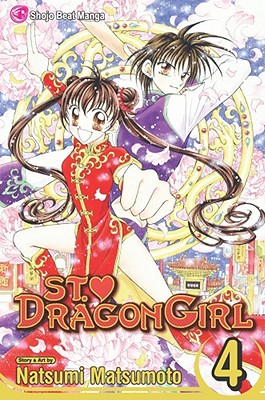 An action-packed romantic comedy Momoka Sendou (nicknamed Dragon Girl) and Ryuga Kou are childhood friends. Momoka is a martial artist, and Ryuga is a Chinese magic master who banishes demons. In order to increase his power, Ryuga calls on the spirit of a dragon to possess him, but the spirit enters Momoka instead. Now the two must unite forces and fight demons together Momoka's dragon takes on the form of a beautiful man and warns Ryuga and Momoka of dangers facing the Kou family. But the dragon also has something else in mind--he wants Momoka to become his mate Can Ryuga compete against a dragon for Momoka's affections?

Natsumi Matsumoto debuted with the manga Guuzen Janai Yo! (No Coincidence!) in Ribon Original magazine. St. Dragon Girl was such a hit that it spawned a sequel, St. Dragon Girl Miracle. Her other series include Angel Time and Alice kara Magic. In her free time, Natsumi studies Chinese and practices tai chi. She also likes visiting aquariums and collecting the toy prizes that come with snack food in Japan.
Loading...
or
Not Currently Available for Direct Purchase