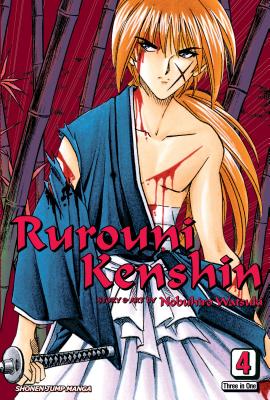 Packed with action, romance and historical intrigue, Rurouni Kenshin is one of the most beloved and popular manga series worldwide. Set against the backdrop of the Meiji Restoration, it tells the saga of Himura Kenshin, once an assassin of ferocious power, now a humble rurouni, a wandering swordsman fighting to protect the honor of those in need.

Kenshin journeys to the home of Arai Shakkû, the legendary swordsmith who forged his sakabatô, in the hope of procuring a replacement for the blade that was shattered in a fight with Seta Sôjirô. Instead of Shakkû, though, Kenshin finds his son Seikû, who has given up making instruments of death. But when word gets around that before he passed away Shakkû forged a final blade, one of Shishio's warriors also decides to pay a visit, and he doesn't plan on leaving empty-handed. With the safety of Seikû's family at risk, Kenshin springs into action, even if it means fighting without a weapon at his side!

Kenshin realizes that if he is to defeat Shishio the time has come to complete his training in Hiten Mitsurugi-ryû. But first he will have to convince his incredibly stubborn master, Hiko Seijûrô, that he is indeed worthy of Hiten Mitsurugi's greatest secrets and techniques. Then, with all of his Juppongatana "Ten Swords" fighters now in Kyoto, Shishio kicks into high gear with his scheme to radically alter the face of Meiji Era Japan. Can Kenshin, Saitô and Misao marshal their resources in time to prevent Shishio from burning Kyoto to the ground?!