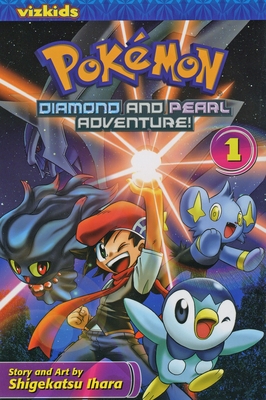 • This is the official tie-in to the Diamond & Pearl franchise.
• The second coming of Pokémon is taking over the world (of retail)!
• The Pokémon franchise is well known among parents as a safe bet and kid-friendly.
• Diamond & Pearl is one of the top-selling video games worldwide and is the most successful Pokémon release since the original series, selling almost 9 million copies worldwide and generating over $25 billion as of August 2007.
• The success of Diamond & Pearl games has generated enormous fan awareness not only of that series, but also of Pokémon across the board; even older titles such as Pokémon Adventures have seen a sales spike since the game’s debut.
• The anime series Diamond & Pearl is one of Cartoon Network’s feature properties, airing in the prime weekday afternoon time-slot.
• The theatrical release of the movies in the U.S.-the first in June 2008-will raise the profile of the series still higher.
• For Pokémon fans who have to get 'em all (or at least all the VIZ Media licensed merchandise)!
• Over 150 million Pokémon video games sold worldwide / 40 million in the U.S.
• Over 14 billion trading cards sold worldwide.

The fourth generation of the franchise, Diamond and Pearl, debuted in Japan in 2006, and is the most successful Pokémon release since the original series, selling more than 10 million video game units worldwide (and 3.4 million units in the U.S. since its 2007 debut).