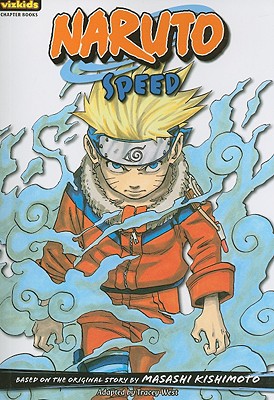 The VIZ Kids line of chapter books debuts with Naruto, the story of a plucky prankster with a powerful secret whose ultimate goal is to be the world's greatest ninja!
Naruto is a ninja-in-training with a need for attention, a knack for mischief and, sealed within him, a strange, formidable power. His antics amuse his instructor Kakashi and irritate his teammates, intense Sasuke and witty Sakura, but Naruto is serious about becoming the greatest ninja in the village of Konohagakure!
Speed:Naruto's enemy Zabuza, the Demon of the Mist, is back! Naruto and his ninja friends Sasuke and Sakura, along with their teacher Kakashi, put everything they've got into protecting bridge-builder Tazuna and his family from the evil Zabuza. But this time, Zabuza has a partner, the fastest ninja Naruto's ever faced: the super-speedy Haku!

Author/artist Masashi Kishimoto was born in 1974 in rural Okayama Prefecture, Japan. After spending time in art college, he won the Hop Step Award for new manga artists with his manga Karakuri (""Mechanism""). Kishimoto decided to base his next story on traditional Japanese culture. His first version of Naruto, drawn in 1997, was a one-shot story about fox spirits; his final version, which debuted in Weekly Shonen Jump in 1999, quickly became the most popular ninja manga in Japan.
or support indie stores by buying on
Copyright © 2020 American Booksellers Association