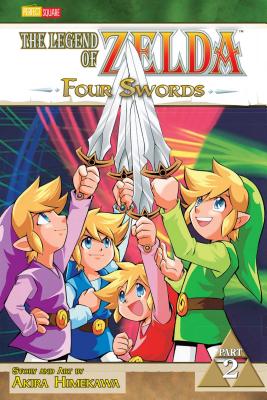 The Legend of Zelda, Vol. 7 (Paperback)

In the mystical land of Hyrule, three spiritual stones hold the key to the Triforce, and whoever holds them will control the world.

R to L (Japanese Style) In the mystical land of Hyrule, three spiritual stones hold the key to the Triforce, and whoever holds them will control the world. A boy named Link sets out on a quest to deliver the Emerald, the spiritual stone of the forest, to Zelda, Pr
Four Swords Pt. 2 The green, red and blue Links reach Death Mountain, where they challenge Shadow Link and Violet Link in battle. Then, inside the Fire Temple they learn a terrible secret about the Dark World and the evil power behind Vaati. To defeat this great enemy, the different colored Links must find a way to become one again in order to harness the power of the Four Sword! The manga adapation of the legendary video game series, now available in English for the first time! Become part of the Legend – The Legend of Zelda!

Akira Himekawa is the collaboration of two women, A. Honda and S. Nagano. Together they have created nine manga adventures featuring Link and the popular video game world of The Legend of Zelda, including Ocarina of Time, Oracle of Seasons and Four Swords. Their most recent work, Legend of Zelda: Phantom Hourglass, is serialized in Shogaku Rokunensei.
or support indie stores by buying on
Copyright © 2020 American Booksellers Association