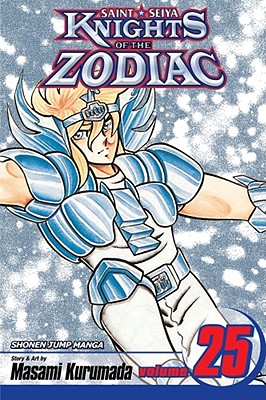 The series begins with the story of Seiya, the main hero, who is one of Athena's Knights. Seiya, along with the other Bronze Knights, must train hard to earn their Cloths, and take on other challenges as well. Knights of the Zodiac (Saint Seiya) has been a hit in Japan (where it is known as simply Saint Seiya), as well as many European countries including Spain, France, and Italy. Hades has awakened...in the body of Andromeda Knight Shun As the peaceful Shun struggles with the lord of the underworld for possession of his body, the indestructible Ikki rises to destroy Hades once and for all. But can Ikki bring himself to kill Hades if it means the death of his beloved little brother? Meanwhile, Seiya, ignoring his own serious injuries, takes on the Specter Harpy Valentine. With the fateful Greatest Eclipse approaching, all the forces of Hades and Athena brace themselves for the final Battle of the Gods.

Masami Kurumada made his manga debut in 1974 with Sukeban Arashi (Delinquent Storm), the story of the life of a teenage girl. His first big hit came in 1977 with the popular series Ring ni Kakero (Put it All in the Ring). In 1986, he truly hit it big when he created Saint Seiya (Knights of the Zodiac), which was first serialized in Weekly Shonen Jump magazine, then went on to span 28 volumes, 114 TV episodes, four movies and a video game!
Loading...
or support indie stores by buying on