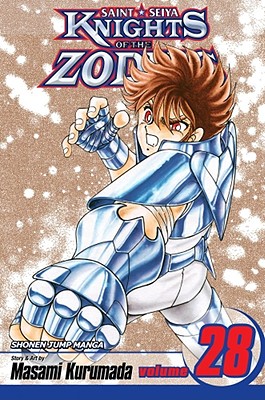 The series begins with the story of Seiya, the main hero, who is one of Athena's Knights. Seiya, along with the other Bronze Knights, must train hard to earn their Cloths, and take on other challenges as well. Knights of the Zodiac (Saint Seiya) has been a hit in Japan (where it is known as simply Saint Seiya), as well as many European countries including Spain, France, and Italy. Final Volume As Seiya lies defeated in Elysium, all the friends and comrades he's met in his battles join forces to revive him. But only a miracle can save Seiya now...a miracle worthy of the ancient Olympian gods Meanwhile, at the shrine of Hades, Athena lies close to death and Hades is about to reawaken in his true form. To win this final battle, the Bronze Knights must prepare to put their lives on the line against ultimate evil... Don't miss the final volume of this classic Shonen Jump epic.

Masami Kurumada made his manga debut in 1974 with Sukeban Arashi (Delinquent Storm), the story of the life of a teenage girl. His first big hit came in 1977 with the popular series Ring ni Kakero (Put it All in the Ring). In 1986, he truly hit it big when he created Saint Seiya (Knights of the Zodiac), which was first serialized in Weekly Shonen Jump magazine, then went on to span 28 volumes, 114 TV episodes, four movies and a video game!
Loading...
or
Not Currently Available for Direct Purchase