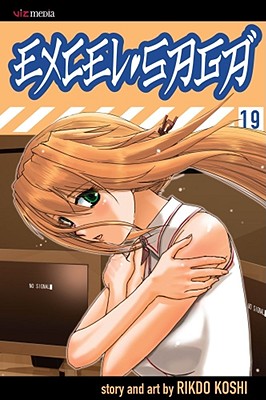 Stories the director himself said they didn't dare put in the anime Q: What happens when you try to act like an anime character in real life? A: EXCEL SAGA. Two groups of neighbors in an apartment building lead secret lives. One thinks they're trying to take over the city of Fukuoka. The other thinks they're trying to defend it. Only their bosses, would-be conqueror Lord Il Palazzo and obsessed bureaucrat Dr. Kabapu, know the truth behind this increasingly dangerous private game... Too bad neither will let their underlings in on it Usually Elgala knows too little...but now she knows too much Sent out by her Lord to live as a fugitive on the streets of Fukuoka, the poor purple-haired girl is back to the kind of homeless lifestyle she used to whine about with Seniors Excel and Hyatt--but now, she's all alone...except for, awww, a small white doggy. Somewhere on those same streets is the person Elgala insists exists...the real Excel. But Excel doesn't know who she is--and is she becoming so much a part of the Shiouji family that contentment will trump conquest?

Rikdo Koshi's Excel Saga was the creator's first professional effort and made its debut in 1997. He is also the author of Holy Brownie, published through Shonen Gahosha, and Arahabaki, published in Shueisha's Ultra Jump. He lives in Fukuoka, Japan.
Loading...
or
Not Currently Available for Direct Purchase