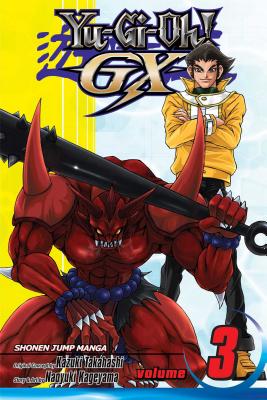 The Next Generation of Duelist has arrived.

Years after Yugi's legendary battles, the game is so popular that special institutions dedicated to the art of the Duel have sprung up all over the world. Join Jaden Yuki and his pals at the Academy for the adventures of the next generation of Yu-Gi-Oh!

The Duel Academy Tournament moves into high gear as Jaden and his friends battle it out with each other for a chance to duel the legendary Zane "Kaiser" Truesdale. American duelists David Rabb and Reggie Mackenzie are also in the running, but their goal is not to take the title of Duel Champion--they're after nothing less than Winged Kuriboh, Jaden's most trusted, and enchanted, card!

Naoyuki Kageyama was born April 12, 1969, which makes him an Aries, and is originally from Tokyo, Japan. He is the recipient of an honorable mention for the 1990 Weekly Shonen Jump Hop Step Award for his work Mahou No Trump (Magic Trump) and started drawing Yu-Gi-Oh! GX for Monthly V Jump in February 2006. Kageyama is a baseball fan and his favorite team is the Seibu Lions.
Loading...
or support indie stores by buying on