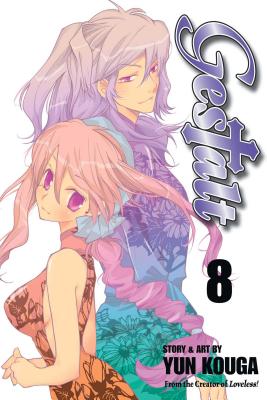 The quest for a man's soul, the battle for his heart, the war for a world. In the legendary past the gods battled for supremacy and cast out the demon god whose name cannot be spoken. Banished to Earth, the demon found refuge on the mysterious and dangerous island known only as G. Final Volume So what's a girl to do with the power of an immortal god? It's a tough decision, especially with the fate of Ouri's homeland at stake. She and Father Olivier are going to fight an ancient battle all over again, and if they win? It just might mean that everyone--from the gods all the way on down to Olivier himself--will find what they've been searching for. If they don't... well, one way or the other, their journey is coming to a spectacular conclusion.

Yun Kouga began her career as a doujinshi author and debuted in 1986 with the original manga Metal Heart, serialized in >Comic VAL. She is the creator of the popular series Loveless and Earthian, along with many manga and anime projects, including character design for Gundam 00. Her works Crown of Love and Gestalt are also published by VIZ.
Loading...
or
Not Currently Available for Direct Purchase