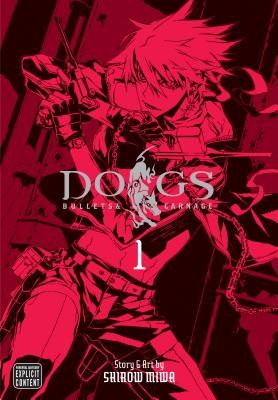 An action-packed, stylish shoot-'em-up. Boasting furious action, switchback plotting, magnetic characters and dazzling art, Dogs tells the story of four individuals struggling to survive a dystopian urban future by gun and sword and courage and luck. Badou's in trouble again. He's found some of the Lost Children, rare genetic experiments left from the past--but so has the mafia. It's up to Heine to bail him out, but the Stray Dog has his own problems now that the enigmatic Giovanni is back on the scene. Meanwhile, Naoto comes to the Underground searching for the killer who wields the same strange black sword as hers. And so their paths begin to converge in the dark and dangerous heart of the city...

Shirow Miwa debuted in UltraJump magazine in 1999 with the short series Black Mind. His next series, Dogs, published in the magazine from 2000 to 2001, instantly became a popular success. He returned in 2005 with Dogs: Bullets & Carnage, which is currently running in UltraJump. Miwa also creates illustrations for books, music videos and magazines, and produces doujinshi (independent comics) under the circle name m.m.m.WORKS. His website is http: //mmm-gee.net.
Loading...
or support indie stores by buying on