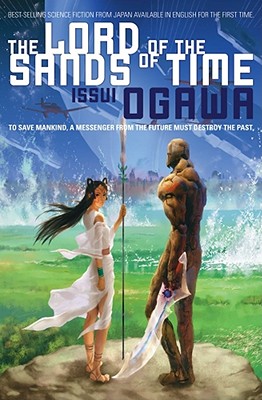 The Lord of the Sands of Time (Novel)

Sixty-two years after human life on Earth was annihilated by rampaging alien invaders, the enigmatic Messenger O is sent back in time with a mission to unite humanity of past eras—during the Second World War and ancient Japan, and even back to the dawn of the species itself—to defeat the invasion before it begins. However, in a future shredded by war and genocide, love waits for O. Will O save humanity only to doom himself?

Born in 1975 in Gifu Prefecture, Japan, Issui Ogawa is rapidly becoming known as one of Japan's premier SF writers. His 1996 debut, First a Letter from Popular Palace, won the Shueisha JUMP Novel Grand Prix. The Sixth Continent (2003; forthcoming from Haikasoru in 2010), a two-part novel about settlement on the moon, garnered the 35th Seiun Prize. A collection of his short stories won the 2005 Best SF Poll, and "The Drifting Man," included in that collection, was awarded the 37th Seiun Prize for domestic short stories. Other works include Land of Resurrection, Free Lunch Era, Fortress in a Strange Land, and Guiding Star. Ogawa is a principal member of the Space Authors Club.
Loading...
or
Not Currently Available for Direct Purchase