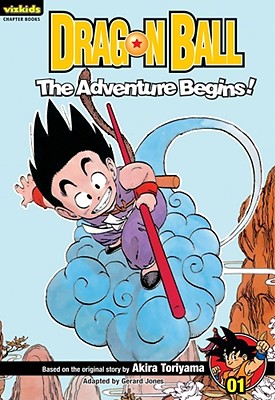 Reads L to R (Western Style) The Adventure Begins! Deep in a forest untouched by civilization, Goku lives a simple life. He trains hard every day, just like his grandpa taught him, never giving a thought to the wide world beyond his home. But when a
Dragon Ball introduces a young monkey-tailed boy named Goku, whose quiet life changes when he meets a girl named Bulma who is on a quest to collect seven "Dragon Balls." If she gathers them all, an incredibly powerful dragon will appear and

Artist/writer Akira Toriyama burst onto the manga (Japanese comics) scene in 1980 with the wildly popular Dr. Slump, a science fiction comedy about the adventures of a mad scientist and his android daughter. In 1984 he created the beloved series Dragon Ba
Loading...
or support indie stores by buying on