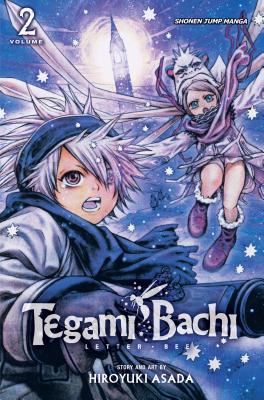 Amberground is locked in darkness. A man-made star casts only a dim light over the land. The pitch-black wilderness is infested with Gaichuu—colossal insects with metal exoskeletons. The Gaichuu make travel between the cities of Amberground extremely dangerous. But thankfully the Letter Bees, a brave corps of messengers, risk their lives in order to keep the hearts of Amberground connected.

Lag is close to becoming a Letter Bee! On the way to his final interview at the National Postal Service, he found a dingo: Niche, a feral young girl with shocking strength and hair made of golden swords. Now, as they approach the bridge to the middle-caste district, they stop to rest in Kyrie, a desperado town. They meet Nelli, a friendly young man who shows them to an inn. Nelli's so helpful that they never notice him steal Lag's crossing pass!

Hiroyuki Asada made his debut in Monthly Shonen Jump in 1986. He’s best known for his basketball manga I’ll. He’s a contributor to artist Range Murata’s quarterly manga anthology Robot. Tegami Bachi: Letter Bee is his most recent series.
Loading...
or support indie stores by buying on