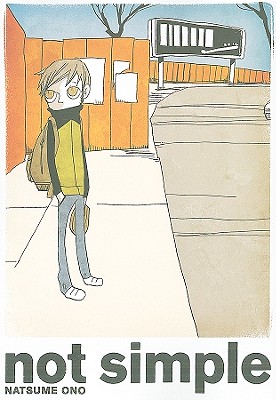 Complex, powerful, and emotionally wrenching, not simple is a novel told in visual form by one of the most acclaimed creators at work today.

Complex, powerful, and emotionally wrenching, not simple is a novel told in visual form by one of the most acclaimed creators at work today.

Reads R to L (Japanese Style). Ian, a young man with a fractured family history, travels from Australia to England to America in the hope of realizing his dreams and reuniting with his beloved sister. His story unfolds backwards through the framing narrative of Jim, a reporter driven to capture Ian’s experiences in a novel: not simple. A story within a story, a book within a book, a tale about the search for family, for an emotional home.

Natsume Ono made her professional debut in 2003 with the webcomic La Quinta Camera. Her next works, not simple and Ristorante Paradiso, met with both critical and popular acclaim. Her current series House of Five Leaves (Saraiya Goyou) is running in IKKI magazine, and Gente (a continuation of Ristorante Paradiso) appears in Erotics F magazine. She also creates doujinshi (independent comics) under the circle name basso. Her website, settantanove orsi, is at http://79orsi.web.fc2.com.
or
Buy Here
Copyright © 2020 American Booksellers Association