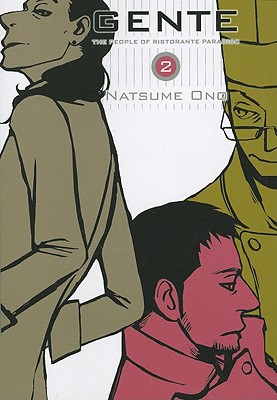 The People of Ristorante Paradiso

Take home a handsome Italian waiter. Buona sera Welcome to Casetta dell'Orso, a quaint little restaurant in the heart of Rome. The food's delicious, but the handsome staff of bespectacled gentlemen is the real draw. Follow these dashing men home and witness their romances, heartaches, hopes and dreams in this delightfully whimsical continuation of Natsume Ono's beloved Ristorante Paradiso. In this volume, Claudio reminisces about when he was a young, insecure waiter just getting his feet wet. Vanna gets to the bottom of why Teo's stubborn lack of ambition prevents him from living up to his full potential in the kitchen. A woman running a streak of bad luck finds cheer when Gabriella introduces her to the magical ambience of Casetta dell'Orso. And finally, a mysterious young woman arrives with an important message for Lorenzo.

Natsume Ono made her professional debut in 2003 with the webcomic La Quinta Camera. Her subsequent works not simple, Ristorante Paradiso, Gente, and House of Five Leaves (Saraiya Goyou) met with both critical and popular acclaim. Both Ristorante Paradiso and House of Five Leaves have been adapted into TV anime series
Loading...
or
Not Currently Available for Direct Purchase