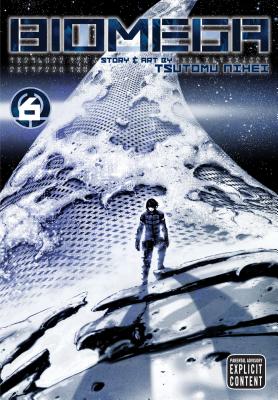 Searching for the key to save a world beyond hope. Tsutomu Nihei's sci-fi horror epic!

In Tsutomu Nihei's nightmare vision of the future, the N5S virus has swept across the earth, turning most of the population into zombie-like drones. Zoichi Kanoe, an agent of Toa Heavy Industry, is humanity's last hope, and he's not even human! With the help of Fuyu, a digitized intelligence built into the computer system of his Heavy Dual Coil motorcycle, Zoichi's search for the key to salvation will take him on a journey across surreal landscapes and hurl him into battle against mind-bending evil. Prepare yourself for the ultimate trip--prepare yourself for the world of BIOMEGA.

Niarudi and the DRF rule the strange cordlike world of the Recreator. Yet without Eon Green, Niarudi will never be able to remake the world as she wishes. Now the biomechanical inhabitants of the Recreator are beginning to succumb to dronification, a result of the N5S plague that wiped out the original Earth. Only Zoichi and Fuyu can stop the nightmare from repeating itself, but to do so they'll need to find Eon Green and the incredible secret she holds about the past that will shape the future. The final confrontation is at hand, and the prize for victory is the power to transform humanity and the world itself!

Tsutomu Nihei debuted with the Shiki Award-winning short story BLAME!. Born in 1971 in Fukushima Prefecture, Japan, he enjoyed continued success with the Harvey Award-nominated series BLAME! and prequel, NOiSE. His visually striking Snikt! was published by Marvel Comics along with a literally speechless commission by Bungie Studios for the Halo Graphic Novel.
Loading...
or support indie stores by buying on