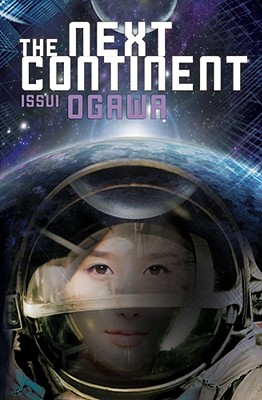 The Next Continent (Novel)

Humanity is returning to the moon, but this time the mission is Japanese, and in private hands for commercial purposes.

L to R (Western Style). Humanity is returning to the moon, but this time the mission is Japanese, and in private hands for commercial purposes. The year is 2025 and Otaba General Construction—a firm that has built structures to survive the Antarctic and the Sahara—has received its most daunting challenge yet. Sennosuke Touenji, the chairman of one of the world's largest leisure conglomerates, wants a moon base fit for civilian use, and he wants his granddaughter Tae to be his eyes and ears on the harsh lunar surface. Tae and Otaba engineer Aomine head to the moon where adventure, trouble, and perhaps romance await.

Known as one of Japan’s premier sci-fi writers. His 1996 debut, First a Letter From Popular Palace, won the Shueisha JUMP Novel Grand Prix. The Next Continent (2003, Haikasoru 2010), a garnered the 35th Seiun Prize. A collection of his short stories won the 2005 Best SF Poll, and The Drifting Man, included in that collection, was awarded the 37th Seiun Prize for domestic short stories. Other works include Land of Resurrection, Free Lunch Era, and The Lord of the Sands of Time (Haikasoru 2009). Ogawa is a principal member of the Space Authors Club (http://www.sacj.org/index.htm).
Loading...
or support indie stores by buying on
(This book is on backorder)