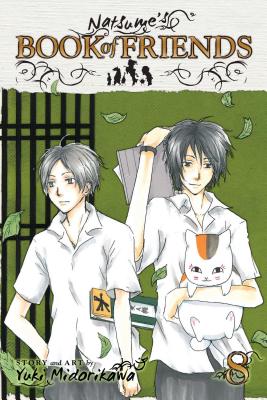 Takashi Natsume can see the spirits and demons that hide from the rest of humanity. He has always been set apart from other people because of his gift, drifting from relative to relative, never fitting in. Now he's a troubled high school student who has come to live in the small town where his grandmother grew up. And there he discovers that he has inherited more than just the Sight from the mysterious Reiko.

Nyanko Sensei is recovering after being wounded in the last yokai incident, so Takashi is on his own when he accidentally releases a yokai right before the school festival. With new friends and his ever-strengthening relationship with the Fujiwaras, Takashi has more reasons than ever to keep the supernatural at bay. But does he stand a chance without Nyanko Sensei's power to back him up?

Yuki Midorikawa is the creator of Natsume's Book of Friends, which was nominated for the Manga Taisho (Cartoon Grand Prize). Her other titles published in Japan include Hotarubi no Mori e (Into the Forest of Fireflies), Hiiro no Isu (The Scarlet Chair) and Akaku Saku Koe (The Voice That Blooms Red).
Loading...
or support indie stores by buying on