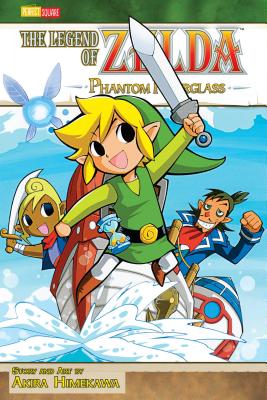 The manga adapation of the legendary video game series, now available in English for the first time! Become part of the Legend – The Legend of Zelda!

In the mystical land of Hyrule, three spiritual stones hold the key to the Triforce, and whoever holds them will control the world. A boy named Link sets out on a quest to deliver the Emerald, the spiritual stone of the forest, to Zelda, Princess of the land of Hyrule. The journey will be long and perilous, and Link will need all his skill and courage to defeat evil. The battle for Hyrule and the Sacred Realm has begun!

Link's friend Tetra is taken prisoner by a ghost ship, and Link falls overboard when he tries to save her. When he wakes up, he finds himself embarked on another fantastic quest! The discovery of the Phantom Hourglass sets Link on a journey to rescue Tetra, find the Sand of Hours and break the curse on the Temple of the Ocean King. Come aboard with Link for an amazing adventure on the high seas!

Akira Himekawa is the collaboration of two women, A. Honda and S. Nagano. Together they have created ten manga adventures featuring Link and the popular video game world of The Legend of Zelda, including Ocarina of Time, Oracle of Seasons and Four Swords. Their most recent work, The Legend of Zelda: Twilight Princess, is serialized digitally on the Manga One app in Japan.
Loading...
or support indie stores by buying on