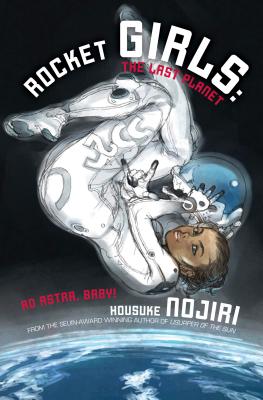 Yukari Morita is a high school girl on a quest to find her missing father. While searching for him in the Solomon Islands, she receives the offer of a lifetime--she'll get the help she needs to find her father, and all she need do in return is become the world's youngest, lightest astronaut. Yukari and her teen friends, all petite, are the perfect crew and cargo for the Solomon Space Association's launches, or will be once they complete their rigorous and sometimes dangerous training.

When the Rocket Girls accidentally land in the yard of Yukari Morita's old school, it looks as though their experiment is ruined. Luckily, the geeky Akane is there to save the day. Fitting the profile--she's intelligent, enthusiastic, and petite--Akane is soon recruited by Solomon Space Association. Yukari and Akane are then given the biggest Rocket Girl mission yet: a voyage to the edge of the solar system and the minor planet of Pluto to save a NASA probe.

Housuke Nojiri was born in Mie, Japan, in 1961. After working in instrumentation control, CAD programming and video game design, he published his first work, The Blind Spot of Veis, based on the video game Creguian, in 1992. He gained popularity with his subsequent works, the Creguian series and the Rocket Girl series. In 2002, he published Usurper of the Sun (Haikasoru 2009), ushering in a new era of space science fiction in Japan. After first appearing as a series of short stories, Usurper won the Seiun Award for best Japanese science fiction novel of 2002. His other works include Pendulum of Pinieru and Fuwa-Fuwa no Izumi. More information can be found on his website: http://njb.virtualave.net/web/ (Japanese only)
or
Not Currently Available for Direct Purchase
Copyright © 2020 American Booksellers Association