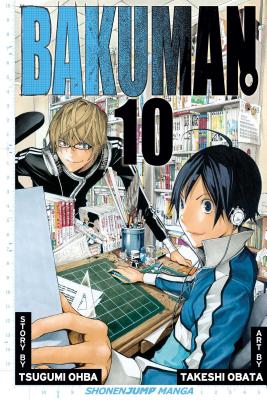 By the creators of Death Note! The mystery behind manga-making revealed!

Average student Moritaka Mashiro enjoys drawing for fun. When his classmate and aspiring writer Akito Takagi discovers his talent, he begs Moritaka to team up with him as a manga-creating duo. But what exactly does it take to make it in the manga-publishing world?

Moritaka and Akito will need to come up with an amazing new manga idea if they ever hope to get back into Weekly Jump magazine, and they only have six months to do it! But with Hattori, their former editor, helping behind the scenes, the duo might have everything in place to create the perfect story.

Takeshi Obata was born in 1969 in Niigata, Japan, and first achieved international recognition as the artist of the wildly popular Shonen Jump title Hikaru no Go, which won the 2003 Tezuka Osamu Cultural Prize: Shinsei “New Hope” Award and the 2000 Shogakukan Manga Award. He went on to illustrate the smash hit Death Note as well as the hugely successful manga Bakuman, All You Need Is Kill, and Platinum End.
or
Not Currently Available for Direct Purchase
Copyright © 2020 American Booksellers Association