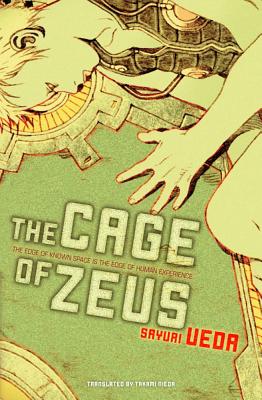 The Cage of Zeus (Paperback)

Reads L to R (Western Style), for audiences A
The “rounds” are humans with the sex organs of both genders. Artificially created to test the limits of the human body in space, they are now a minority, despised and hunted by the terrorist group Vessel of Life. Aboard Zeus I, a space station orbiting the planet Jupiter, the “rounds” have created their own society with a radically different view of gender and of life itself. Security chief Shirosaki keeps the peace between the “rounds” and the typically gendered “mono,” but when a terrorist strike hits the station, the balance of power and tolerance is at risk, and an entire people is targeted for genocide.

Born in Hyogo prefecture, Sayuri Ueda is one of the more innovative authors of science fiction in Japan. She won the 2003 Komatsu SakyoAward with her debut novel, Mars Dark Ballad. The Cage of Zeus is her second novel, originally published in 2004. Her recent short fiction collection, Uobune, Kemonobune (Fish Boat, Animal Boat) was highly acclaimed in SF community and its title story was nominated for 2010 Seiun Award—the equivalent of the Hugo award in the English-speaking world.
or
Not Currently Available for Direct Purchase
Copyright © 2020 American Booksellers Association