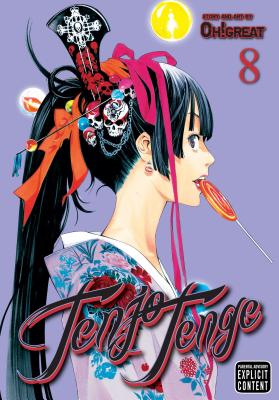 By popular demand, an all-new publication of a fan favorite—now 100% faithful to the original—in a value-saving 2-in-1 format with premium color content.

Knuckle-busting brawls, badass babes, and the toughest student body ever to mix it up under one roof. Welcome to Todo High, where the only rule is: get strong or get schooled.

Sohaku’s lost his head—literally. But everything has gone according to plan. A look back at the past may shed some light on our heroes’ fates. In a time of war, Sohaku schemes to have the Red Feathers take control of Osaka Castle. After witnessing the deaths of his friends and having to sacrifice his comrades, what does Ichiyo Nagi see before him now? Turning to face the final battle, the courses of the two eras flow into one, with all the pieces falling into place at the Todo Academy Preliminaries!

Oh!great began his career as a professional manga creator in 1995. In 1997 his hit series Tenjo Tenge started running in UltraJump magazine, and in 2004 it was adapted into a TV anime. Air Gear, which began serialization in Weekly Shonen Magazine in 2002, received a Kodansha Manga Award in 2006 and was also adapted into a TV anime.
Loading...
or support indie stores by buying on