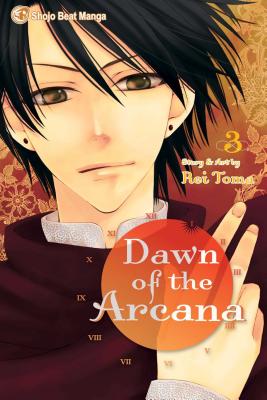 Dawn of the Arcana, Vol. 3 (Paperback)

A medieval fantasy where a princess’s mysterious power alters her fate!

Princess Nakaba of Senan and Prince Caesar of Belquat only married each other for the sake of peace between their two warring countries, so no one expected there to be love between the unlikely couple. Nakaba is starting to warm to Caesar, however, and her attendant Loki doesn’t like this one bit. Are Loki and Caesar destined to be enemies? And how does Nakaba’s power, the Arcana of Time, fit into all this?

Rei Toma has been drawing since childhood, but she only began drawing manga because of her graduation project in design school. When she drew a short-story manga,Help Me, Dentist, for the first time, it attracted a publisher's attention and she made her debut right away. Her magnificent art style became popular, and after she debuted as a manga artist, she became known as an illustrator for novels and video game character designs. Her current manga series, Dawn of the Arcana, is her first long-running manga series, and it has been a hit in Japan, selling over a million copies.
or
Not Currently Available for Direct Purchase
Copyright © 2020 American Booksellers Association