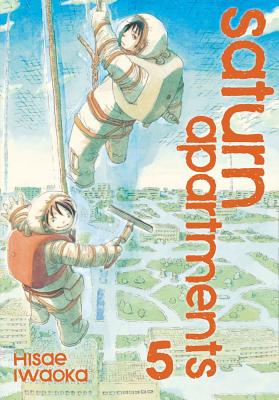 A touching, character-rich vision of an intriguing new world. Reads R to L (Japanese Style), for audiences T. Far in the future, humankind has evacuated the earth in order to preserve it. Humans now reside in a gigantic structure that forms a ring around the earth, thirty-five kilometers up in the sky. The society of the Ring is highly stratified: the higher the floor, the greater the status. Mitsu, the lowly son of a window washer, has just graduated junior high. When his father disappears and is assumed dead, Mitsu must take on his father's occupation. As he struggles with the transition to working life, Mitsu's job treats him to an outsider's view into the living-room dioramas of the Saturn Apartments. Mitsu's a window-washer in the Ring System, a civilization constructed after Earth was abandoned and turned into a nature preserve. His father died on the job five years earlier, and Mitsu takes his work seriously. Unfortunately, not all of his coworkers feel the same way, and they begin to resent the care and diligence he puts into clearing a vision of Earth for the residents of the Ring. One day, while staying late to check on his colleague's work, Mitsu loses radio contact. Will he meet the same fate as his father?

Hisae Iwaoka is the creator of several one-shot manga, including Hana Boro (Flower Cookies) and Shiroi Kumo (White Clouds), both of which were serialized in IKKI magazine. A noted artist and illustrator, her installations have been displayed internationally in the group show Tokyo Girls Bravo, curated by Takashi Murakami. Saturn Apartments is her most recent series.
Loading...
or support indie stores by buying on