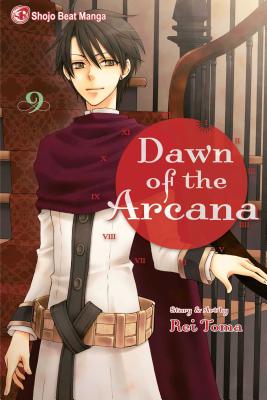 Dawn of the Arcana, Vol. 9 (Paperback)

A medieval fantasy where a princess’s mysterious power alters her fate!

Princess Nakaba of Senan and Prince Caesar of Belquat married each other for the sake of peace between their two warring countries. Political forces threaten to tear their world apart, but the two are inexplicably drawn to each other… But what happens when Nakaba finds out about Loki’s feelings for her? Torn between wanting to reciprocate the love of her dear friend and the love she now feels for her husband, Caesar, Nakaba’s decision between the two men may drastically change the fate of the future!

Rei Toma has been drawing since childhood, but she only began drawing manga because of her graduation project in design school. When she drew a short-story manga,Help Me, Dentist, for the first time, it attracted a publisher's attention and she made her debut right away. Her magnificent art style became popular, and after she debuted as a manga artist, she became known as an illustrator for novels and video game character designs. Her current manga series, Dawn of the Arcana, is her first long-running manga series, and it has been a hit in Japan, selling over a million copies.
or support indie stores by buying on
(This book is on backorder)
Copyright © 2020 American Booksellers Association