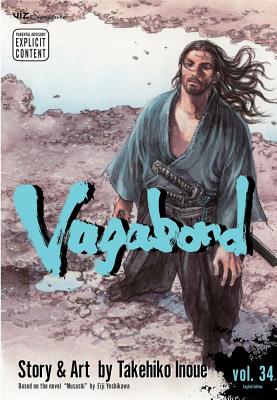 Striving for enlightenment by way of the sword, Miyamoto Musashi is prepared to cut down anyone who stands in his way. Vagabond is an action-packed portrayal of the life and times of the quintessential warrior-philosopher--the most celebrated samurai of all time The greatest samurai duel in the history of Japan between Miyamoto Musashi and Sasaki Kojiro draws closer as their different intertwining paths head toward their imminent conclusion. For now, Kojiro finds himself in a new position as sword instructor to the powerful Hosokawa Clan in Kokura. Meanwhile, Musashi is still dealing with the aftermath of singlehandedly destroying the mighty Yoshioka School. Reads R to L (Japanese Style) for mature audiences.

Takehiko Inoue is the creator of one of the most popular manga of all time, Slam Dunk, which has sold over 100 million copies worldwide. He followed that series up with two titles lauded by critics and fans alike-- Vagabond, a fictional account of the life of Miyamoto Musashi, and Real, a manga about wheelchair basketball. Inoue is the recipient of numerous awards, including the prestigious Tezuka Osamu Cultural Prize and the Media Arts Festival Award. In addition to his work on manga, Inoue has worked on television commercials, character designs for video games, and is the founder of a scholarship to foster Japanese basketball talent.
or support indie stores by buying on
Copyright © 2020 American Booksellers Association