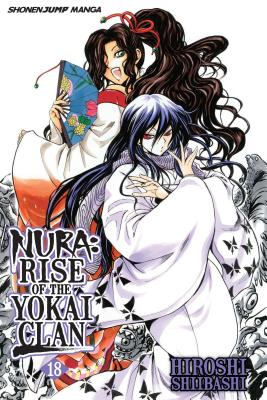 A supernatural saga of a 13-year-old by day, and a leader of a demon clan by night—straight from the pages of Weekly Shonen Jump!

While the day belongs to humans, the night belongs to yokai, supernatural creatures that thrive on human fear. Caught between these worlds is Rikuo Nura. He's three-quarters human, but his grandfather is none other than Nurarihyon, the supreme commander of the Nura clan, a powerful yokai consortium. So, Rikuo is an ordinary teenager three quarters of the time, until his yokai blood awakens. Then Rikuo transforms into the future leader of the Nura clan, leading a hundred demons.

Harken back with us to the Golden Age of Edo, when Rikuo’s father Rihan first takes control of the Nura clan. Gain new perspectives on Rikuo’s family history, as well as the backstory on some of your favorite devilish yokai (including that pesky Demon Lord Gorozaemon Sanmoto). Follow Rihan’s second-heir adventures as he learns the hard way that controlling, commanding and battling yokai is not to be taken lightly, lest you be the one who's taken.

Hiroshi Shiibashi debuted in BUSINESS JUMP magazine with Aratama. NURA: RISE OF THE YOKAI CLAN is his breakout hit. He was an assistant to manga artist Hirohiko Araki, the creator of Jojo’s Bizarre Adventure. Steel Ball Run by Araki is one of his favorite manga.
Loading...
or
Not Currently Available for Direct Purchase