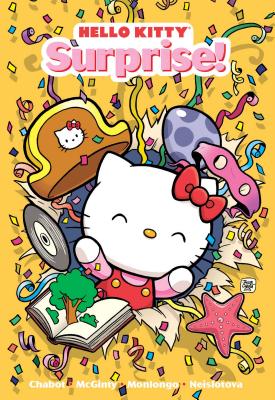 Hello Kitty and her friends are off on adventures near and far!

What’s that? Who’s there? It’s a surprise!

Expect the unexpected! A day at the beach is more than just fun in the sun. A mysterious egg holds a tiny secret. Mama and Papa have a few secrets of their own. And a quiet afternoon with a good book is more enchanting than Hello Kitty ever could have imagined!

Plus, prepare to be amazed by Anastassia Neislotova’s tales of wonder!

Jorge Monlongo makes comic books, editorial and children’s illustrations, video game designs and paints on canvas and walls. He combines traditional and digital techniques to create worlds in beautiful colors that usually hide terrible secrets. You can see his works in the press (El País, Muy interesante, Rolling Stone) and read his comic book series, Mameshiba, published by VIZ Media in the USA.

Giovanni Castro was born in Colombia, studied art there, and now lives and works in Barcelona, Spain.

Jacob Chabot is a New York City-based cartoonist and illustrator. His comics have appeared in publications such as Nickelodeon Magazine, Mad Magazine, Spongebob Comics, and various Marvel titles. He also illustrated Voltron Force: Shelter from the Storm and Voltron Force: True Colors for VIZ Media. His comic The Mighty Skullboy Army is published through Dark Horse and in 2008 was nominated for an Eisner Award for Best Book for Teens. More examples of Jacob's work can be found at www.beetlebugcomics.com.
Loading...
or support indie stores by buying on