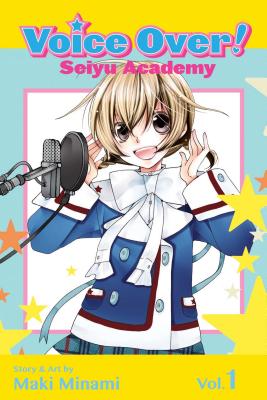 A new series by the author of the best-selling S•A!

Hime Kino’s dream is to one day do voice acting like her hero Sakura Aoyama from the Lovely ♥ Blazers anime, and getting accepted to the prestigious Holly Academy’s voice actor department is the first step in the right direction! But Hime’s gruff voice has earned her the scorn of teachers and students alike. Hime will not let that stand unchallenged. She’ll show everyone that she is too a voice acting princess, whether they like it or not!!

To make matters worse, Sakura’s grouchy son, Senri, is in Hime’s class, and he seems determined to stomp on her dreams. He even has the nerve to call Lovely ♥ Blazers stupid! But Hime won’t be deterred by naysayers, her new nickname (“Gorilla Princess”), or even getting demoted to the Stragglers group. She’s ready to shine, and nothing is going to stand in her way!

Maki Minami is from Saitama Prefecture in Japan. She debuted in 2001 with Kanata no Ao (Faraway Blue). Her other works include Kimi wa Girlfriend (You're My Girlfriend), Mainichi ga Takaramono (Every Day Is a Treasure) and Yuki Atataka (Warm Winter). S•A and Voice Over! Seiyu Academy are published in English by VIZ Media.
Loading...
or support indie stores by buying on