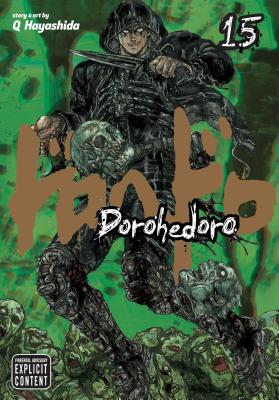 Who's the boss? Things are getting weird in En's former mansion. The Cross-Eyes realize their boss has been transformed into a pie, of all things, and scramble in an all-out effort to save him. Meanwhile, Kasukabe has entered the former En mansion and has witnessed Kai's secret experiments—the numerous heads of magic users whose meanings are slowly coming to light. It might be the beginning of the end—the countdown to the final truth has begun!

Known for her bold style and seamless creation of alternate universes, QHayashida made her manga debut with Maken X Another, which ran in Magazine Z and was subsequently adapted into a video game. She followed this series with a sequel, Maken X Another Jack. Dorohedoro is her latest series.
Loading...
or
Not Currently Available for Direct Purchase