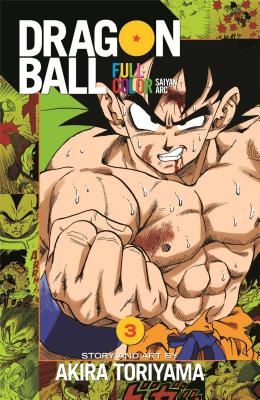 With the mighty Kaio-ken amplifying his strength, Goku fights Vegeta in a desperate battle to save the world, only to find that the elite Saiyan warrior is even stronger than his own techniques! Goku calls on the Genki-dama, the “spirit ball,” drawing power from every living thing around him. But alone, even Goku is not enough. The last worn-out survivors, Gohan, Kuririn and Yajirobe, rush back into the fray to try and stop the unbeatable Vegeta from destroying the planet Earth itself!

Renowned worldwide for his playful, innovative storytelling and humorous, distinctive art style, Akira Toriyama burst onto the manga scene in 1980 with the wildly popular Dr. Slump. His hit series Dragon Ball (published in the U.S. as Dragon Ball and Dragon Ball Z) ran from 1984 to 1995 in Shueisha's Weekly Shonen Jump magazine. He is also known for his design work on video games such as Dragon Quest, Chrono Trigger, Tobal No. 1, and Blue Dragon. His recent manga works include COWA!, Kajika, Sand Land, Neko Majin, and a children's book, Toccio the Angel. He lives with his family in Japan.
Loading...
or support indie stores by buying on
(This book is on backorder)