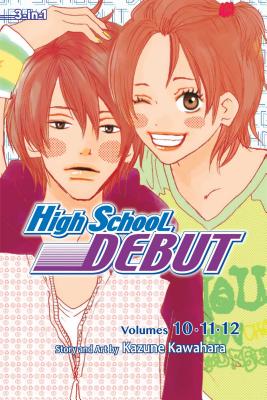 A bargain omnibus edition of the best-selling romantic comedy series that features a high school girl’s hilarious quest for love!

Hapless Haruna needs help finding a boyfriend! After failing to win the eye of any guy in high school, Haruna enlists the help of cute upperclassman Yoh to coach her on how to make herself more appealing to the male spec ies. Yoh agrees, with one catch: Haruna had better not fall for him!

Friendship and love are put to the test when Yoh’s friend Asaoka reveals that he likes Haruna. The two boys strike a deal—whoever loses the school sports meet will give up on her! Later, Haruna grapples with an unattractive girl who’s obsessed with Yoh… But can Haruna win against jealousy and sabotage?

Kazune Kawahara is from Hokkaido Prefecture in Japan and was born on March 11 (a Pisces!). She made her manga debut at age 18 with Kare no Ichiban Sukina Hito (His Most Favorite Person). Her best-selling shojo manga series High School Debut is available in North America from VIZ Media. Her hobby is interior redecorating.
Loading...
or support indie stores by buying on
(This book is on backorder)