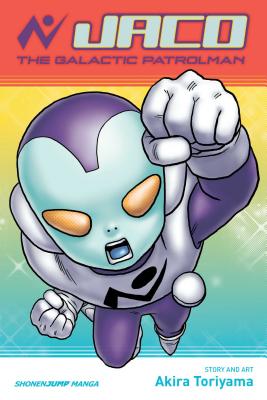 Akira Toriyama, manga legend and creator of Dragon Ball Z, is back with the quirky comedy Jaco the Galactic Patrolman! Retired scientist Omori lives alone on a deserted island while continuing his research into time-travel. His quiet life is interrupted when galactic patrolman Jaco crash-lands and decided to move in with him. Can Jaco get along with the old man long enough to save the earth from a dangerous threat? Includes a special bonus chapter introducing Dragon Ball Z hero Goku's parents!

Renowned worldwide for his playful, innovative storytelling and humorous, distinctive art style, Akira Toriyama burst onto the manga scene in 1980 with the wildly popular Dr. Slump. His hit series Dragon Ball (published in the U.S. as Dragon Ball and Dragon Ball Z) ran from 1984 to 1995 in Shueisha's Weekly Shonen Jump magazine. He is also known for his design work on video games such as Dragon Quest, Chrono Trigger, Tobal No. 1, and most recently, Blue Dragon. His recent manga works include COWA!, Kajika, Sand Land, Neko Majin, and a children's book, Toccio the Angel. He lives with his family in Japan.
or
Buy Here
Copyright © 2020 American Booksellers Association