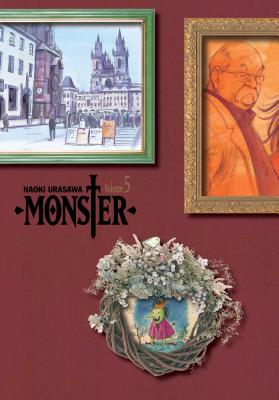 Johan is a cold and calculating killer with a mysterious past, and brilliant Dr. Kenzo Tenma is the only one who can stop him! Conspiracy and serial murder open the door to a compelling, intricately woven plot in this masterwork of suspense.

“Once upon a time, there lived a monster without a name. He wanted a name very badly. So one day he made up his mind to set out on a journey to find a name.” How could this strange Czech children’s story have upset Johan so much? Does the book hold any clues to the mystery of Johan’s birth? One mystery leads to another as events unfold. The border police spot Tenma when he tries to smuggle himself into the Czech Republic to look for Johan’s mother. With the help of Grimmer, a freelance journalist, Tenma manages a narrow escape. Though the two men part without discussing what brought them together, Grimmer is also deeply interested in the same thing Tenma is looking for—511 Kinderheim, which once existed in East Germany. The story moves to the streets of Prague…

Naoki Urasawa's career as a manga artist spans more than twenty years and has firmly established him as one of the true manga masters of Japan. Born in Tokyo in 1960, Urasawa debuted with BETA! in 1983 and hasn't stopped his impressive output since. Well-versed in a variety of genres, Urasawa's oeuvre encompasses a multitude of different subjects, such as a romantic comedy (Yawara! A Fashionable Judo Girl), a suspenseful human drama about a former mercenary (Pineapple ARMY; story by Kazuya Kudo), a captivating psychological suspense story (Monster), a sci-fi adventure manga (20th Century Boys), and a modern reinterpretation of the work of the God of Manga, Osamu Tezuka (Pluto: Urasawa x Tezuka; co-authored with Takashi Nagasaki, supervised by Macoto Tezka, and with the cooperation of Tezuka Productions). Many of his books have spawned popular animated and live-action TV programs and films, and 2008 saw the theatrical release of the first of three live-action Japanese films based on 20th Century Boys. No stranger to accolades and awards, Urasawa received the 2011 and 2013 Eisner Award for Best U.S. Edition of International Material—Asia, and is a three-time recipient of the prestigious Shogakukan Manga Award, a two-time recipient of the Osamu Tezuka Cultural Prize, and also received the Kodansha Manga Award. Urasawa has also become involved in the world of academia, and in 2008 accepted a guest teaching post at Nagoya Zokei University, where he teaches courses in, of course, manga.
Loading...
or support indie stores by buying on
(This book is on backorder)