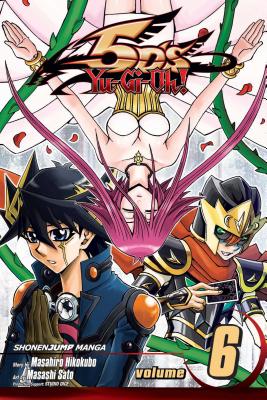 Goodwin’s plan to revive the Ultimate God moves forward as he sets up a match between Akiza and Sect that mirrors a fateful duel five thousand years ago! Yusei has gathered all the Star Tickets and entered the Duel Gate. Even if he can find his friend Sect, he still has to get past the Skeleton Knight, and if he does, will he have the strength to face the Ultimate God?

Masashi Sato debuted as a mangaka in Akamaru Jump in the summer of 2004 with the short story Mikakushi Tsumuji. He was also a semi-finalist in the 64th Tezuka Award for his work Guhou Daichi. After working as an assistant to the Yu-Gi-Oh! manga creative team, Masashi Sato is now the lead artist on Yu-Gi-Oh! 5D’s. He is a fan of Nobuhiro Watuski’s Rurouni Kenshin, and of course, Kazuki Takahashi’s Yu-Gi-Oh!
Loading...
or support indie stores by buying on