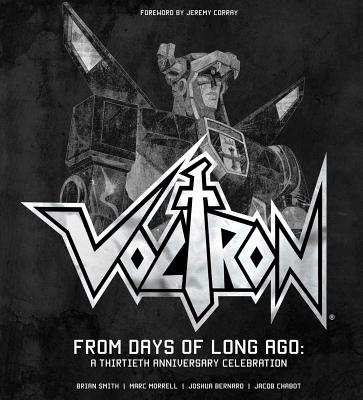 From Days of Long Ago: A Thirtieth Anniversary Celebration (Voltron: Defender of the Universe)

Thirty years ago, America was introduced to Voltron: Defender of the Universe. This is a detailed look at the Voltron universe, including the story of how Voltron took the U.S. by storm and continues to be culturally relevant today.

Brian Smith is a former Marvel Comics editor. His credits include The Ultimates, Ultimate Spider-Man, Iron Man, Captain America, The Incredible Hulk, and dozens of other comics. Smith is the co-creator/writer behind the New York Times best-selling Graphic Novel The Stuff of Legend, and the writer/artist of all-ages comic The Intrepid EscapeGoat (set to debut on Free Comic Book Day 2011). His writing credits include Finding Nemo: Losing Dory from BOOM! Studios, and SpongeBob Comics from Bongo. Smith is also the illustrator of The Adventures of Daniel Boom AKA LOUDBOY!, named one of The Top 10 Graphic Novels for Youths 2009 by Booklist Online. His illustration clients include Time Out New York Magazine, Nickelodeon, MAD Kids Magazine, Harper Collins, Bongo Comics, Grosset & Dunlap, and American Greetings.
or
Not Currently Available for Direct Purchase
Copyright © 2020 American Booksellers Association