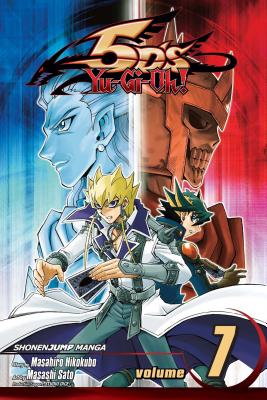 Rex Goodwin and Jack Atlas reach the end of their epic duel, and Goodwin demonstrates his ancient power. Elsewhere, Crow Hogan has released the other Duelists sealed by Lazar, but it’s too late for them to go to Yusei’s aid now. High in Aerial Fortress Seibal, Yusei battles the Skeleton Knight to reach Sect…!

Masashi Sato debuted as a mangaka in Akamaru Jump in the summer of 2004 with the short story Mikakushi Tsumuji. He was also a semi-finalist in the 64th Tezuka Award for his work Guhou Daichi. After working as an assistant to the Yu-Gi-Oh! manga creative team, Masashi Sato is now the lead artist on Yu-Gi-Oh! 5D’s. He is a fan of Nobuhiro Watuski’s Rurouni Kenshin, and of course, Kazuki Takahashi’s Yu-Gi-Oh!
or support indie stores by buying on
Copyright © 2020 American Booksellers Association