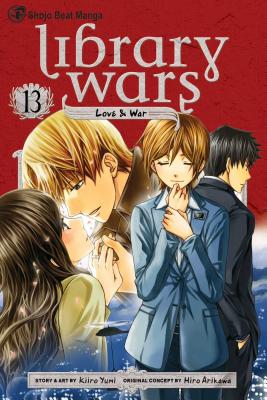 By Hiro Arikawa (From an idea by), Yumi Kiiro (Illustrator)

The Media Betterment Committee has silenced a famous writer, and Library Forces member Iku Kasahara and her supervisor and secret crush, Dojo, must fight to protect his right to speak…and live! As the Library Forces wage a fierce battle against censorship, Iku and Dojo’s burgeoning relationship provides the team with a welcome distraction, and—unfortunately for them—some comic relief!

Hiro Arikawa won the 10th Dengeki Novel Prize for her work "Shio no Machi: Wish on My Precious" in 2003 and debuted with the same novel in 2004. Of her many works, Arikawa is best known for the "Library Wars" series and her "Jieitai Sanbusaku" trilogy which consists of "Sora no Naka" (In the Sky), "Umi no Soko" (The Bottom of the Sea), and "Shio no Machi" (City of Salt).
or support indie stores by buying on
Copyright © 2020 American Booksellers Association