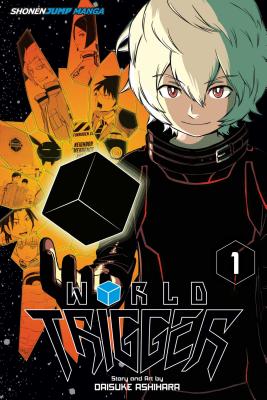 Earth is under constant threat from Neighbors, invincible monsters from another dimension that destroy our way of life. At least we have the elite warriors of Border, who co-opt alien technology to fight back!

Our hero Osamu Mikumo may not be the best agent, but he’ll do whatever it takes to defend life on Earth as we know it.

When Osamu meets a feisty humanoid Neighbor named Yuma, everything that he thinks is right is turned on its head. Can the two natural enemies ever become friends?

Daisuke Ashihara began his manga career at the age of 26 when his manga Room 303 won second place in the 75th Tezuka Awards. His first series, Super Dog Rilienthal, began serialization in Weekly Shonen Jump in 2009. World Trigger is his second serialized work in Weekly Shonen Jump. He is also the author of several shorter works, including the one-shots Super Dog Rilienthal and Trigger Keeper and Elite Agent Jin.
Loading...
or
Not Currently Available for Direct Purchase