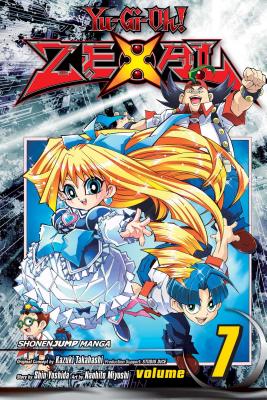 The latest Yu-Gi-Oh! series; includes an ultra-rare trading card that is highly valued by collectors.

In a futuristic city, augmented reality Duels are all the rage. Duelists, using devices called D-Gazers, can interact with their environment and their opponents as never before! With more awesome monsters and unbelievable cards, the future of Yu-Gi-Oh! starts right here!

Kyoji Yagumo has maneuvered Yuma and Kaito into a duel for Haruto’s life. Elsewhere, Luna approaches the Numbers club and enlists them to help her locate Haruto. With all the Numbers cards now in play in the massive Heartland Duel Arena, the final battle of the Numbers War is about to begin!