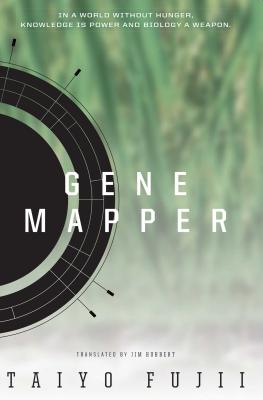 In a future where reality has been augmented and biology itself has been hacked, the world’s food supply is genetically modified, superior, and vulnerable. When gene mapper Hayashida discovers that his custom rice plant has experienced a dysgenic collapse, he suspects sabotage. Hayashida travels Asia to find himself in Ho Chi Minh City with hired-gun hacker Kitamura at his side—and in mortal danger—as he pushes ever nearer to the heart of the mystery.

Taiyo Fujii was born in Amami Oshima Island—that is, between Kyushu and Okinawa. He worked for stage design, desktop publishing, exhibition graphic design, and software development.

In 2012, Fujii self-published Gene Mapper serially in a digital format of his own design, and it became Amazon.co.jp's number one Kindle bestseller of that year. The novel was revised and republished in both print and digital as Gene Mapper—full build—by Hayakawa Publishing in 2013 and was nominated for the Nihon SF Taisho Award and the Seiun Award. His second novel, Orbital Cloud, won the 2014 Nihon SF Taisho Award and took first prize in the “Best SF of 2014” in SF Magazine. His recent works include Underground Market and Bigdata Connect.
Loading...
or support indie stores by buying on
(This book is on backorder)