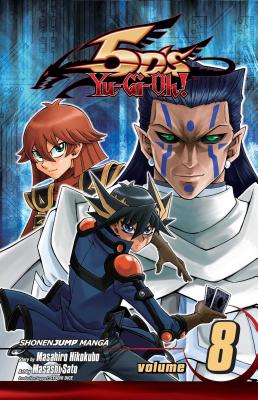 Yusei and Sect continue their epic duel in Aerial Fortress Seibal. As Sect unleashes a powerful attack, he tells Yusei the Ultimate God is about to return to life. If their friendship is strong enough, they may be able to withstand the Ultimate God’s resurrection—but are their struggles all just part of Goodwin’s plan?

Masashi Sato debuted as a mangaka in Akamaru Jump in the summer of 2004 with the short story Mikakushi Tsumuji. He was also a semi-finalist in the 64th Tezuka Award for his work Guhou Daichi. After working as an assistant to the Yu-Gi-Oh! manga creative team, Masashi Sato is now the lead artist on Yu-Gi-Oh! 5D’s. He is a fan of Nobuhiro Watuski’s Rurouni Kenshin, and of course, Kazuki Takahashi’s Yu-Gi-Oh!
Loading...
or support indie stores by buying on