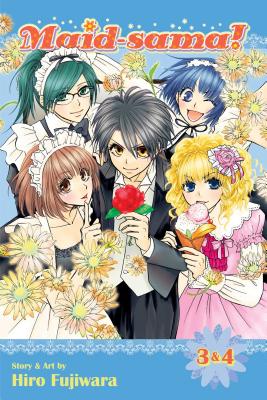 A 2-in-1 edition of the romantic-comedy series where a student council president secretly works at a maid café!

As if being student council president of a predominantly male high school isn’t hard enough, Misaki Ayuzawa has a major secret—she works at a maid café after school! How is she supposed to keep her image of being ultrasmart, strong and overachieving intact once school heartthrob Takumi Usui discovers her double life?!

When Café Maid Latte plans a slew of themed events like “Maid Rangers Day” and “Little Sister Day,” Misaki surprisingly struggles with playing the “little sister”! Later, more shenanigans erupt at the café… Misaki is usually up to any challenge, but how will she handle things when a pretty idol called Aoi decides to make Usui hers?

Hiro Fujiwara is from Hyogo Prefecture in Japan and was born on December 23. Maid-sama! (originally published as Kaicho wa Maid Sama! in Hakusensha’s LaLa magazine) is her first long-running manga series and is available in North America from VIZ Media.
Loading...
or support indie stores by buying on