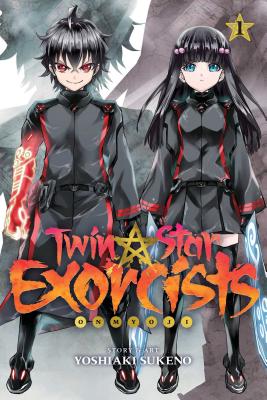 The “Twin Star Exorcists” are fated to produce the child prophesied to end the war with the monstrous Kegare… But can Rokuro and Benio get along for five minutes, let alone save the world?

Rokuro dreams of becoming anything but an exorcist! Then mysterious Benio turns up. The pair are dubbed the "Twin Star Exorcists" and learn they are fated to marry...

Can Rokuro escape both fates?

When Rokuro's best friend Ryogo goes missing, Rokuro is forced to ask Benio for help to enter Magano, the realm of the evil Kegare, to rescue him!

Yoshiaki Sukeno was born July 23, 1981, in Wakayama, Japan. He graduated from Kyoto Seika University, where he studied manga. In 2006, he won the Tezuka Award for Best Newcomer Shonen Manga Artist. In 2008, he began his previous work, the supernatural comedy Binbougami ga!, which was adapted into the anime Good Luck Girl! in 2012.
Loading...
or support indie stores by buying on