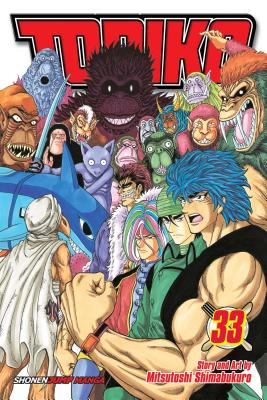 Toriko and the gang did it! They captured Acacia’s Salad—Air! However, the victory celebration is cut short when a familiar friend-now-foe, Teppei, steals Komatsu’s heart right out of his chest and disappears into the Back Channel! Now Toriko and the other Four Kings must travel to Area 7 to capture Acacia’s Soup, Pair, to save Komatsu! Ferocious Area 7 won’t be much of a party, but they’ll still have a ball…or two!

Mitsutoshi Shimabukuro made his debut in Weekly Shonen Jump in 1996. He is best known for Seikimatsu Leader Den Takeshi! for which he won the 46th Shogakukan Manga Award for children's manga in 2001. His current series, Toriko, began serialization in Japan in 2008.
Loading...
or support indie stores by buying on