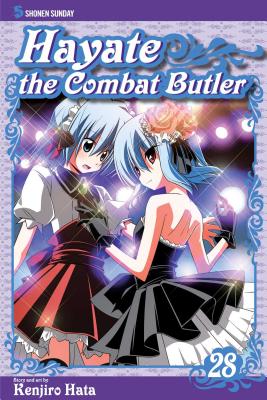 Poor Hayate Ayasaki is responsible for repaying his parents' 150 million yen debt. One Christmas, he meets a girl named Nagi, and after a series of misunderstandings, he somehow ends up working as her butler. Nagi covers for Hayate's debt, but has Hayate dug himself deeper into a different kind of hole? A hilarious tale of butlers, love and battles (?!).

At a real live comic-book convention, Nagi struggles to break into the manga industry while Hayate struts his stuff in maid cosplay. But Hayate's not the only one rocking a double identity. Who is the shy artist turned idol singer turning every otaku's head? Have Hayate's legions of love interests met their stiffest, most fanservicey competition yet?  And why can't Hayate ever spend a nice, relaxing afternoon in drag without having to fight robots?

Without ever receiving any kind of manga award, Kenjiro Hata's first series Umi no Yuusha Lifesavers was published in Shonen Sunday Super. Hayate the Combat Butler is currently serialized in Weekly Shonen Sunday.
Loading...
or
Not Currently Available for Direct Purchase